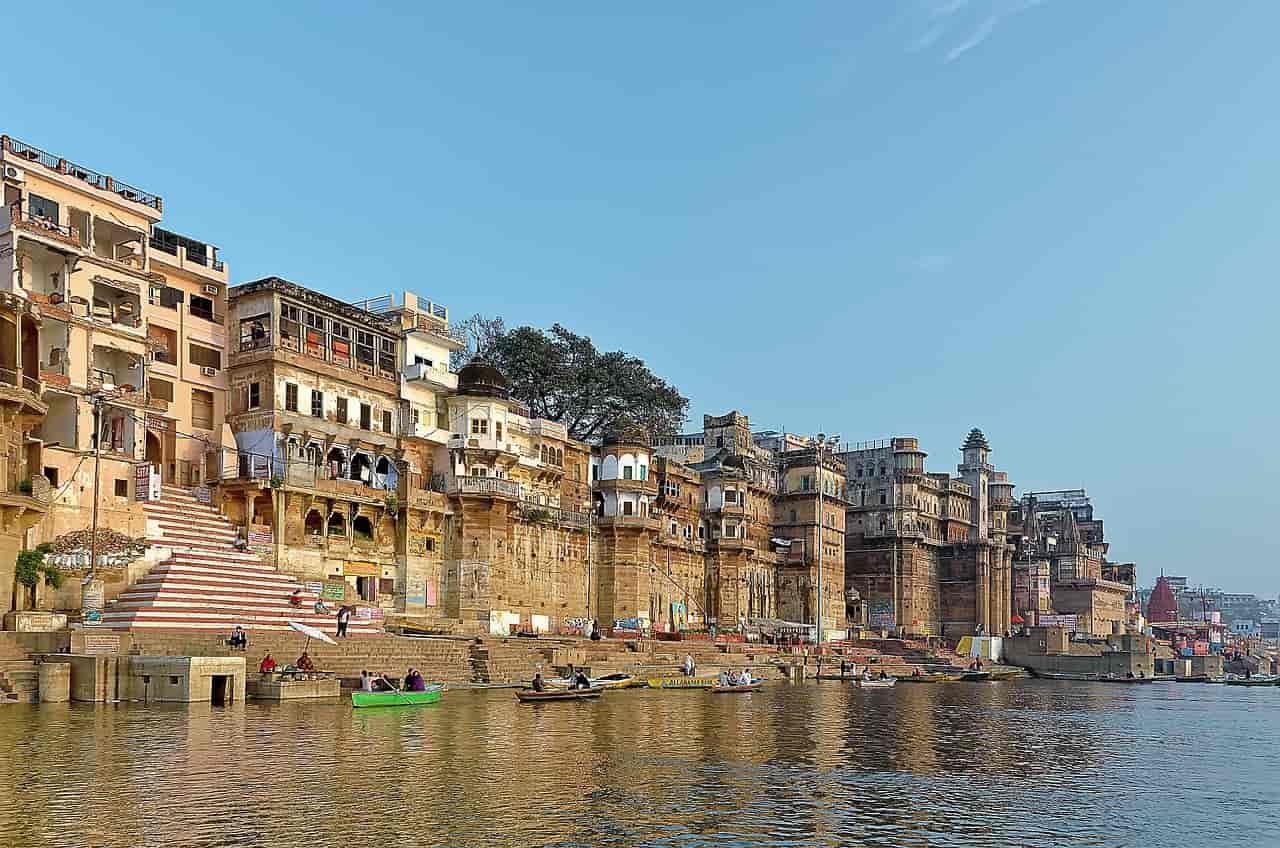 Varanasi or ‘Banaras’ or ‘Benaras’ or ‘Kashi’ is one of the oldest inhabited cities anywhere. It is said to be inhabited since 11th Century BC. Mark Twain, a popular novelist who visited the city once wrote- “Benaras is older than history, older than tradition, older even than legend and looks twice as old as all of them put together”.

It is a very sacred city for Hindus and Buddhists. Hinduism says that if anybody dies here, he is freed from the cycle of birth and rebirth and attains ‘Moksha’. Also, the sacred Ganges River flows through the city and thus creates many ghats where pilgrims can be seen bathing or performing rites or attending Sandhya Aarti. The Ganges is believed to have the power to wash away anybody`s sins. The city has a number of temples too, each with its own significance and story. Sarnath is only 10 km away from the city, where Buddha gave his first sermon after attaining enlightenment.

How Varanasi got its name?

The city got its name from a tale of ‘Vamana Purana’. Two rivers ‘Varuna’ and ‘Assi’ flowed from the primordial being at the start of time. At present these are tributaries to The Ganges. These river flank the southern and northern border of the city. The name of the city comes from combining these to the river`s names. Varuna and Assi combine to form The Varanasi.

The winter season is best to visit Banaras as the temperature ranges between 5-15 Degree Celsius during this time. Also, a plethora of Festivals come during this period like Dussehra, Bharat Milap, Diwali, and also The Ganga Festival which is celebrated in November. Amidst these festivals, the city enjoys with much pomp and show and looks really beautiful especially on Diwali. But, do remember to bring some warm clothes for the chilly mornings and nights. The summer and monsoon season, on the other hand, are really hot and are not very convenient for visiting this place.

Things to do in Varanasi?

Places to visit in Varanasi?

The rising sun and its reflection in the river waters are a sight to behold. The boat ride takes you to the various ghats and palaces of Banaras. All of this drifts you to the great history of the place. The ghats, the palaces and the river all have been the same as they have been through the years. The best time to experience this boat ride is dawn 5:30 am to 8 am in the morning. Also, at dusk, you can experience the spectacular Sandhya Aarti from the boat.

2. Take bath in the Ganges:

The waters of the holy river Ganga are sacred. They absolve you of your sins. The waters also give you Moksha that is freedom from the cycle of birth and death. Benaras has 100 plus ghats, big and small. But all have stairs leading down to the river. You can descend down to the river and have a dip. Taking a dip in the morning and offering water to Sun Lord is a popular ritual in Varanasi.

3. Attend evening Aarti at the Ghats:

The evening Aarti ceremony is one of the most spectacular aarti ceremonies across India. It takes place at the Dasaswamedh Ghat. It is a daily 45-minute ritual that takes place at sharp 6:45 pm. The crowd, the priests chanting, the huge brass lamps, the flowers, and the dusky sky, all create a mesmerizing view. You will leave touched by spirituality. You can also enjoy the ceremony from boats.

4. A sunset or sunrise stroll along the river:

Sunset and sunrise both create reflections in the water and make it an ethereal sight to behold. The city has 100 plus ghats, so exploring some of them is an amazing experience. Sitting quietly alone or with friends and family on a lonely ghat, watching the river is an experience to remember.

One of the very famous things in India is Benarasi Sari. These sarees are woven by the craftsmen of the village Sarai Mohana. These masterpieces sometimes take a week to a year to complete depending upon the degree of detail and craftsmanship required. These sarees are mostly made of Silk, on which Golden or Silver Zari embroidery is done. These are diligent craftsmen and have produced masterpieces for many eminent personalities across the world. A visit here is a must if you want to see the real art and artists behind the Benarasi Sari.

Banaras is famous for its food and foodies and the most popular and tastiest food is not found in big hotels but at the street vendors. They sell all kinds of Chaat and do not miss the spicy Pani Puri, Kachori, Samosa, Aloo Tikki, sweet Jalebi and last but the king of all the ‘Benarasi Paan’. The Benarasi Paan is made on a special Betel Leaf and tastes sweet, and it is a treat to your tastebuds. Some places you should do visit and you can find on the map is Blue Lassi serving the best Lassi and Deena Chaat Bhandar for Chaat.

What are Places to visit in Varanasi?

Ghats are the holiest places of Benaras. At ghats, you can witness, life and death together. Some ghats are cremation sites and some are used for birth rites like Mundan etc. There are 100 plus riverfronts in Banaras.

Dashashwamedh Ghat: Dashashwamedh riverfront (ghat), literally means the riverfront of Ten Sacrificed Horses. The tale goes like this- Once Lord Brahma sacrificed ten horses to bring Lord Shiva back from banishment. The most spectacular feature of the ghat is the evening Aarti ceremony when many ‘pundits’ and hundreds of devotees all assemble to pray to Goddess Ganga.

Manikarnika Ghat: Manikarnika Ghat is the main cremation site of Banaras. The ghat is said to be so sacred that anyone who gets cremated here gets free from the birth and death cycle.

Assi Ghat: Assi Ghat is named so because of the confluence of both Ganga and Assi river takes place here. It is very old and is mentioned in various ‘Puranas’. It is the same place where Tulsidas created Ramcharitmanas. People bathe here before paying homage to the large Shiva Lingam under the Peepal Tree.

The city has a huge number of temples but the most famous of all of them is the Kashi Vishwanath Temple. It is devoted to the Vishveshwara- The God of the whole universe, The Shiva. It is very old but the current version of the temple was built in 1776 by Ahalya Bai of Indore. The temple has a Gold coating that uses a swooping 800 kg of Gold which was given by Maharaja Ranjit Singh of Lahore 50 years later.

The New Vishwanath Temple is also known as Birla Temple as it has been made by the Birla Construction Group. It took 35 long years to build the temple. The temple flaunts the tallest tower of a temple in the whole world. The total height is approximately 250 feet in length. It is in itself a massive architectural masterpiece. It is a complex of 9 shrines, with the main shrine dedicated to Lord Shiva. It has the Holiest Gita`s scriptures written on its walls. All in all, it is a must visit place if you are in Banaras.

Sankat Mochan temple is devoted to Lord Hanuman, a devotee of Lord Ram. Sankat Mochan means who relieves suffering and problems. Lord Hanuman is said to protect from the ill effects of planet Saturn or those people who have Saturn in the wrong place in their horoscope. People visit the temple regularly and the most auspicious day to visit the temple is Tuesday, when devotees offer ‘Laddoos’ to the Lord and the crimson Sindoor from the idol of the Lord is smeared on the foreheads of devotees.

Durga Temple is a temple dedicated to Goddess Durga, the goddess of female power, is clad in red and rides a tiger. The temple is also known as ‘Monkey Temple’ as a large number of monkeys hang out here. This is also a very old temple and has its mention in the old scriptures of Puranas. Non-Hindus can enter the courtyard but not the inner sanctum of the temple.

Tulsi Manas Temple is situated near the Durga Temple and is devoted to Lord Ram as it is made at the same place where the poet Tulsidas wrote the Ramcharitamanas. It was built in 1964 with white marble and is a spectacular sight. The walls of this temple are engraved with scenes and verses of the Ramcharitammanas. The temple is open from 5:30 am in the morning to noon and 3:30 pm in the afternoon to 9 pm in the night.

Sarnath is about 10 km from the city. It is the first place where Buddha delivered its sermon after enlightenment. Apart from Buddhism, the place is sacred to Jainism also. One day before his death, Buddha announced four cities to be sacred to his followers- Sarnath, Lumbini, Bodhgaya and Kushinagar. Sarnath has a vast expanse of ancient Buddhist structures. They date from 3rd Century BC to 11th Century AD. These structures include The Ashoka Pillar, Dhamekha Stupa, Chaukhandi Stupa, Dharmarajika Stupa, Buddhist Temples, Sarnath Museum, and temples of different schools of Buddhism from Japan, Tibet, Nepal, China, Thailand, and Burma. The Ashoka Pillar is the National Emblem of the Country.

Jantar Mantar is an astronomical observatory built by Maharaja Jai Singh of Jaipur in the year 1737. Before the building of Jantar Mantar, he sent his scholars abroad. They studied foreign observatories and brought back many astronomical manuals. With the gained knowledge they made Jantar Mantar. There are many instruments at this place which can still be used for studying planets and stars. They could measure the local time, altitude, declination of Sun, determine Eclipses, and declination of stars and planets, etc.

It is a crumbling fort, which was built in the 17th century. It is standing on the opposite side of the bank of Ganga. It is 14 km from Benaras. Maharaja Balwant Singh built this fort. Now not in a good condition, the Fort houses an interesting museum and a temple dedicated to Rishi Ved Vyas, who wrote Mahabharat. The museum houses various royal items like world-class Weaponry, stone studded Thrones, Vintage cars, Royal Palaquins, Ivory work. The most attractive feature is the big clock that the Ramnagar Fort Palace houses. The clock not only displays time but, day, week, month, year and astronomical facts about Moon, Sun and Constellation of Stars.

The museum is the best picture of the history and culture of a place over centuries placed under a single roof. This museum is situated at Banares Hindu University. It houses 12th-century manuscripts, Hindu and Buddhist sculptures and a wide array of paintings. It houses miniature paintings from the Mughal empire and various images of the museum put a stamp on the existence of the Krishna cult in the 15th -16th century.

So, this was all about the religious and spiritual city of Varanasi. Where life and death come together. Where you can get absolved of all your sins. Where the culture and history are as old as culture and history themselves. Come and immerse in the holiness of the city. For more information on the city go to the official site of Varanasi. Also, read our other articles on the Best Things to do in Panaji and Beauty of Himachal Pradesh.

2 thoughts on “Things To Do and Places To Visit in the Holy City Varanasi!”