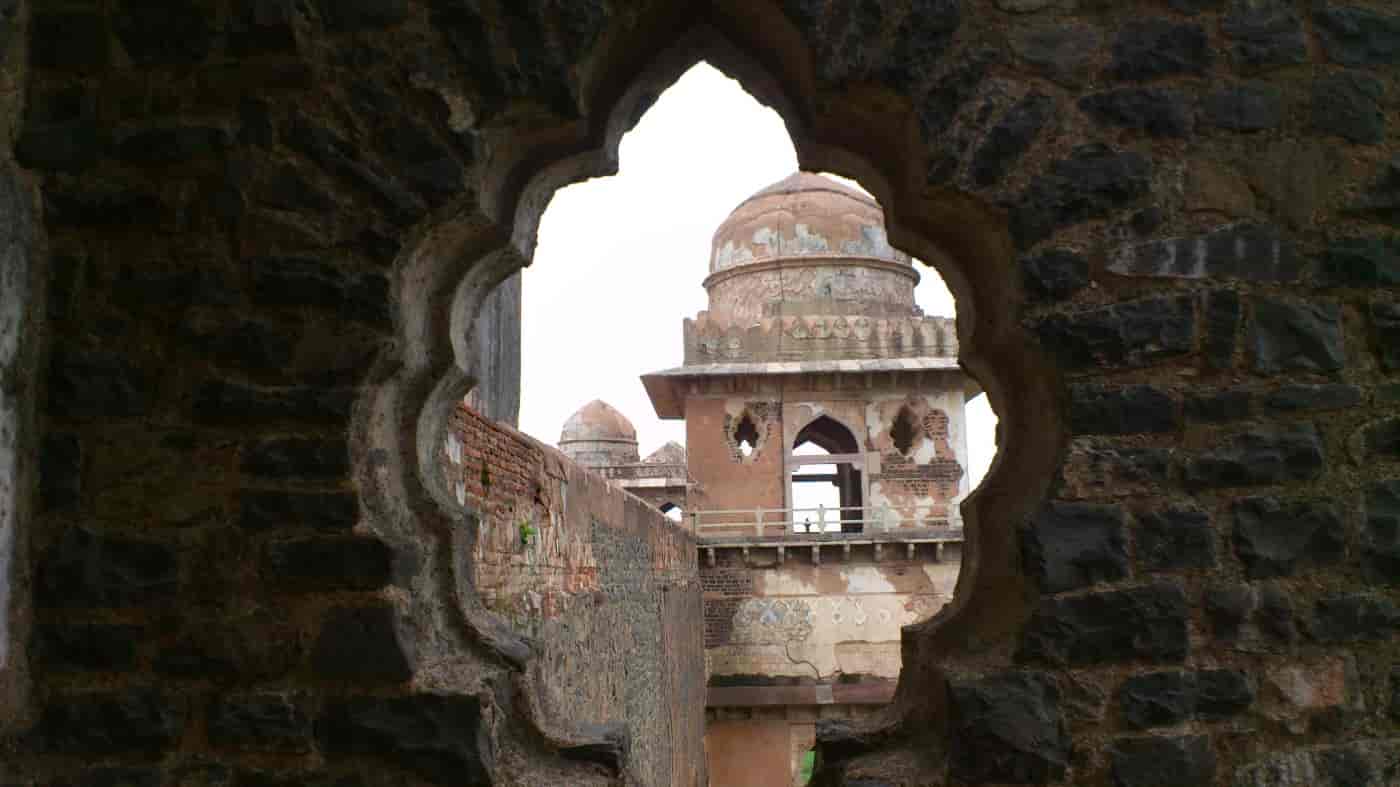 Mandav or more popularly known as ‘Mandu’ is an old city dating back to 6th Century BC. It is heaven for history lovers. It is rich not only in history but also in Culture. It contains the monument that inspired the design of the great Taj Mahal. It houses India`s biggest fort- The Mandu Fort. The old city is also the witness to the legendary romance between Rani Rupmati and Baz Bahadur. The city has once been home to Afghans for a long time. Many ancient Afghan architectural masterpieces are scattered around the town. Its major landmarks are Jahaz Mahal, Hindola Mahal, Rewa Kund, Baz Bahadur Palace. Another interesting point is the echo point. You can definitely spend five minutes here and hear your own voice come back to you. It is en route to Baz Bahadur`s Palace.

What is the legend of Baz Bahadur and Rani Rupmati?

Baz Bahadur the last independent ruler here, was once out for hunting and he crossed a beautiful shepherdess singing and playing with her friends. The king was fond of music and art and was smitten by the shepherdess Rupmati. Baz Bahadur begged Rupmati to accompany him to the capital. Rupmati agreed on the condition that she will never lose sight of her beloved river Narmada.

Soon they were married, but their love was doomed. The Mughal king Akbar sent Adham Khan to capture the town. Baz Bahadur challenged Akbar but his army was no match to the mighty Mughal army. Mandav lost and Adham Khan had his eyes on Rani Rupmati. Sensing the wickedness, she poisoned herself and thus escaped the capture. The folk artists still sing the legend of the brave king Baz Bahadur and beautiful Queen Rupmati`s legend.

The town has tropical weather. It has three seasons. We recommend Winter and monsoon season for the visit. Another reason for visiting the town is the local Mandu Festival, which is held in September or October. The temperatures are fine during this period also.

Summer season here is quite hot and monuments sites are majorly in open and it becomes difficult to explore them.

Winters have moderate temperatures in daytime and chilly weather in mornings and at nights. One might need warm clothes in the daytime but rugs and warm clothes become a necessity at nights and mornings. This season starts in November and goes on till March.

How to Reach Mandu?

The town is well connected by Road and the nearest airport and railway station is in Indore.

The nearest airport is Indore. It is 100 km, roughly 2-hour drive from the town. The airport is well connected from all the major cities of India.

The nearest railway station on Mumbai-Delhi main line is Ratlam (124 km). Another very convenient railway station is Indore Railway Station (99 km). Both the stations are well connected to the small and big cities of India.

Regular buses connect the town with all the nearby cities and towns like Dhar, Indore, Ratlam, Ujjain, Bhopal, Mhow, etc.

Places to visit in Mandu?

Places to visit here are divided into four groups according to the area they are situated in. All of them have ticket counters. Once you buy a ticket for a group you don’t have to buy another one for a monument of that group.

We will discuss the following places

Places to visit in Mandu?

As already said the town is a historical traveler`s heaven. It has many Afghani architectural marvels. The city also houses the Fort of Dhar made by Parmars of 10th Century! Interestingly Hoshang Shah`s Tomb is also the inspiration behind the Taj Mahal. So let’s begin our tour of Mandav, the historical city of Madhya Pradesh, India.

Fort of Dhar is the oldest building here. It was made by Parmars in the 11th Century. Inside the fort, there is a Sheesh Mahal which is quite attractive. The fort is made up of red sandstone and its walls are 30 m high. Other attractions of the place are Kharbuja Mahal, Vishram Bhavan, Madan Kui Sarai, Kothari Sarai, Caravan Sarai, Lady Sufi Saint Roza ki Dargah, Chhapan Mahal, and other attractions.

Mandu Jahaz Mahal built by Sultan Ghiyas-Ud-Din Khilji for his lavish Harem. It is said that it housed many women local and from as far as Turkey. The ‘Ship Palace’ is a 120m long two-storied building built between two artificial lakes- Munj Talao and Kapur Talao. The reflection of the fort below gives the feel of a ship ready to sail. But this ship of stone and mortar has not moved an inch in all these years. It has open corridors, balconies overhanging the lakes, and an open terrace. Jahaz Mahal used to be an exotic palace for royal leisure activities. The silhouette of the palace in the moonlight is even more mesmerizing.

Hindola Mahal simply means the Swinging Palace. This beautiful has rather eccentric architecture. It has sloping walls which give it the look of a swinging palace, thus the name. The palace flaunts delicate trellis work and beautifully carved columns. This place is not very intricately carved but is still very magnificent. To the west of this structure, lie various buildings. They still speak tales of their glorious past. Amongst these structures is Champa Baoli. Other places of interest are Dilawar Khan`s Mosque, Ujali and Andheri Baoli, and Gada Shah`s Shop and House.

Dilawar Khan`s Mosque is an example of the old Indo-Islamic culture and architectural style. The magnificent structure dates back to the 15th century. The date can be confirmed by an inscription dating AD 1405. This period belongs to the first Muslim king of Mandav. The architectural plan of the building has a central courtyard and surrounded by a colonnade. A colonnade is a roof supported by a number of pillars. The roof and pillars inside are in the Hindu style. It is possible that it was inspired by Hindu architecture but most probably, it was built by demolishing some then existing Hindu structure.

The Hammam is a Bath House. It is made in line with the Turkish style of Bath Houses. It is very near to Champa Baoli, from where it used to receive water supply. The Bath House had two chambers or say tanks-one of hot water and the other of cold. Both the tanks had channels and these channels would merge later to mix the cold and hot water. This water would then go to the Hammam. Another fascinating feature of this bathing facility was its roof. Its roof has many star-like grooves, from which light rays would enter the bath and play on the water. What a royal experience it would have been.

Champa Baodi is an elaborately constructed well inside The Royale Palace. It used to supply water for the palace, especially the Hammam. It gets its name by its sweet smelling water which resembles the smell of Champak flower. Also, the well served as a part of the giant cooling system of the palace, an architectural brilliance. The lower story of the well had compartments. These compartments were linked to the Palace rooms known as ‘Tahkhana’ with a subterranean path. These Tahakhanas were on the level with Munj Talao waters. So now, the wind will blow through the pavilions of Munj Talao, through the subterranean path, atop the well, and to the rooms. This would keep the palace cool in even the dire of hot temperatures.

The mosque is a giant. It is inspired by the great mosque of Damascus. Sultan Hoshang Shah Ghuri started the construction of this huge mosque in 1406, and Mahmud Shah Khilji completed it in 1454 AD. The plan is approximately as huge as 100m square and is standing on a plinth of 4.6 m height above the ground. The porch is covered by an impressively huge dome. The building is quite austere but is majestic in its simplicity. Almost no decoration can be seen, except the boundaries of the ornate arches, where the usage of colored tiles can be observed. But the arches, domes, and the huge prayer hall, etc make it one of the finest and biggest examples of Afghan architecture in India.

It is India`s first marble mausoleum. It is also the inspiration behind The Taj Mahal. The construction on this mausoleum was started by Hoshang Shah and it was finished in the time of Mahmud Khalji in AD 1440. It is a fine example of Afghan Architecture. The architecture was so inspiring that Jahangir, the Mughal Emperor sent four of his men to study the tomb and pay homage to the builders of this spectacular monument. One of these four was Ustad Hamid, who was closely involved with the construction of Taj Mahal. Some parts of the great structure also depict the Hindu style, as the sculptors involved were Hindus.

Ashrafi Mahal was conceptualized and built as a Madrasa for young Muslim boys in the era of Hoshang Khan(AD 1404-22). After Hoshang Khan, Mahmud Khalji took over the throne and he built a victory tower and his own tomb in this building. The victory tower was made as a remembrance of his victory over Rana Khumba of Mewar. Now both the victory tower and the tomb are in ruins. The Madrasa, however, is in better condition. At its time of glory, the Madrasa was splendid. It was a great quadrangle and in the center was a spacious open court and was lined with smaller cells for students. Another boundary of double arcades lined the structure. The super-structure though no more exists now.

Rewa Kund is a water tank rebuilt and widened by the ruler Baz Bahadur for his shepherdess wife Rupmati. One of the reasons the tank still retains the old Hindu name is the sanctity of the tank for Hindus. The Rewa Kund is about 4km from the village. Along the sides of the tank at the northwestern side is a structure with arched gateways. Probably these form a part of the leisure palace that existed along its sides.

Baz Bahadur Palace is built to the east of the Rewa Kund. Nasir Shah Khalji built the palace in the 16th Century. This palace was later repaired by Baz Bahadur. Baz Bahadur liked the palace due to its proximity to the Rewa Kund which was a regular affair for Queen Rupmati. The palace has a courtyard in the middle with rooms at the eastern and western sides.

Rani Rupmati Mahal Mandu was initially meant as a watchtower, as a military base to keep watch over the enemies. The pavilions were added later on. But the pavilions on the roof give the building its distinctive appearance. The name of the place has been derived from the Queen Rupmati who frequented here to visit the holy river Narmada in the Nimar valley regularly.

So, this was all about the historical city of Mandav, Madhya Pradesh. For more information go to the official site of Madhya Pradesh Tourism. Also, read our article on Himachal Pradesh and Panaji, Goa.

4 thoughts on “Explore the Historical city of Mandu!”