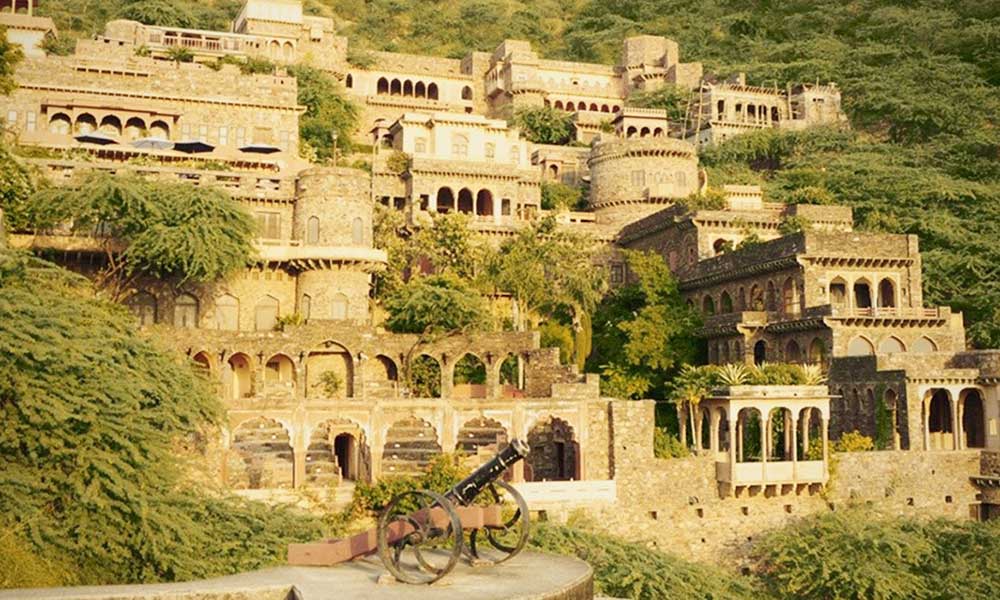 Bhangarh is situated on the banks of the Sariska Tiger Reserve. There is a market in front of it, in which there are ruins of two-story shops lined up on both sides of the road. The fort of Bhangarh is surrounded by hills around it, it is worth seeing here in the rainy season. Bhangarh is considered one of the most feared places in the world. It is said that even today ghosts live here. No one is allowed to stay in Bhangarh Fort before the sun rises and after the sunsets.

Who built the Bhangarh Fort of Rajasthan?

The history of Bhangarh Fort is centuries old. This fort built in Rajasthan in the 17th century is a specimen of ancient art. The fort of Bhangarh is said to have been built by Raja Bhagwat Das of Amer in 1573 for his younger son Madho Singh I.

If we talk about the history of Bhangarh Fort, then many different stories emerge from it, due to which Bhangarh Fort is described as so scary. In this article, we are going to tell you about three of the ghostly stories of Bhangarh Fort.

What is the story of Bhangarh Fort?

But what was written in luck was bound to happen. One of the ambitious successors of Madho Singh raised the fort higher so that the ominous shadow of the fort reached the house of the ascetic. After this, the monk cursed the fort, after which the Bhangarh Fort was completely ruined and became a haunted fort.

What is the secret of Bhangarh Fort Rajasthan?

The second story told about Bhangarh Fort is very strange. Explain that another legend behind Bhangarh Fort is that this fort was completely ruined due to the curse of a tantric and became ghostly.

Let us now tell you its full story. It is said that the princess Ratnavati of the fort of Bhangarh was the cause of the destruction of this fort. Princess Ratnavati was very beautiful in appearance. When a nearby tantric fell in love with the princess. So the tantric thought to subdue the princess with the help of his black magic. He made small efforts several times, but could not succeed.

Due to his constant failures, the desire to find Ratnavati was increasing in his mind to the extent of revenge. He did not even know a little about the fact that Ratnavati is also good knowledge of Tantra. Not knowing this, the Tantric finally made a mistake, due to which he not only caused his death but also the destruction of Bhangarh.

He tried to give the queen a drink that would make the princess fall in love with him, but the princess sniffed the suspicions and foiled the plot.

The tantric was then sentenced to death and crushed to death. Before taking his last breath, the tantric cursed the Bhangarh Fort that no one would be able to live there.

At this time, seeing Singh weakening the power of the Mughals in Delhi, Jai Singh II attacked Bhangarh and Ajabgarh. Not only this, both the kings who became Muslims, were killed and destroyed their kingdoms and turned them into ruins.

What is the best time to visit Bhangarh Fort?

If you are planning to visit Bhangarh, then you can go here at any time in the year but avoid going here in the months of April to June. Because in these months, the heat in Rajasthan is very high. Therefore, the time from November to March will be most appropriate for you.

What is the Opening Time of Bhangarh Fort?

What is Entry Fees of Bhangarh Fort?

Can we see the Bhangarh Fort at night?

If you are planning to visit the fort of Bhangarh located in Rajasthan, then let us tell you that no person is allowed to enter the fort after sunset or before sunrise. Due to the ghost stories of the fort, no one is allowed to enter Bhangarh fort at night. The locals near this fort tell about many extraordinary activities happening here, but it depends on any human being whether he will believe these stories or not.

It is said about the fort of Bhangarh that in this fort there is a shadow of ghosts in the night, here the spirits roam at night and many strange voices are also heard here. It is also said about Bhangarh Fort that whoever enters the fort at night, cannot return in the morning.

A board put up by the Archaeological Survey of India has warned tourists visiting here not to go inside the fort’s premises in the dark.

How to reach Bhangarh Fort?

If you want to visit this fort after knowing so much about Bhangarh Fort, then tell you that Bhangarh is a village in Alwar district of Rajasthan state which is situated between Jaipur and Delhi. The nearest airport to this fort is Santander Airport in Jaipur, which is 56 km from Bhangarh.

If you are planning to go to Bhangarh Fort with the help of train, then for this you will have to get down to Dausa railway station located at a distance of 22 km from Bhangarh. Apart from this, Bhangarh is also connected to all major cities of the country by road. Public buses plying here can reach you to Bhangarh Fort.

How to reach Bhangarh Fort from Delhi?

Bhangarh about 269 km via Delhi to Neemrana route and if you go through Alwar road, it will cost you 242 km. Even after being small, it takes a little longer due to the road conditions of Alwar road not being correct.

How to reach Bhangarh Fort from Alwar?

Alwar in Rajasthan is the nearest city to Bhangarh. Please tell that the distance from Alwar to Bhangarh is about 90 kilometers. From Alwar, you will get taxis and buses to reach Bhangarh Fort.

How to reach Bhangarh Fort from Jaipur?

Bhangarh Fort is just 83 km from Jaipur. If you live in Jaipur, then you can visit here in one day. There can be no better place to go with your friends. To get from Jaipur to Bhangarh, first take NH11 and continue on Agra road.

Then from Dausa, take NH11A and drive for about 15 km. After this, by taking SH 55, you will reach your destination. It will take you up to 2 hours to reach Bhangarh Fort from Jaipur.