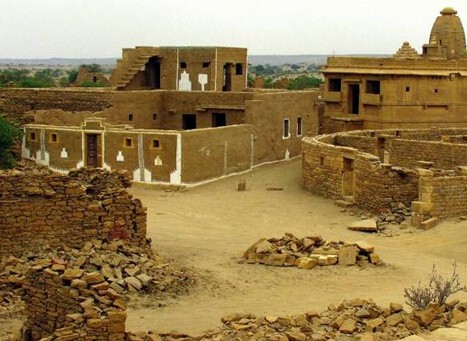 Kuldhara Village Story: There are many mysterious and haunting places in our country India about which different stories are told. One of them is Kuldhara village. It is a cursed and mysterious village which is also known as the Village of Ghosts. So let us tell you the mysterious story of this village.

Many cities of India have included many mysterious incidents in their embrace. One such incident is that of Kuldhara village in Jaisalmer district of Rajasthan. The village has been deserted for the last 170 years.

Thousands of people of Kuldhara village had evacuated this village in the same night and cursed on their way that no one will ever get settled here. The village has been deserted since then. It is said that there is a ghost in this village.

Facts about Haunted Village of Rajasthan

Where is Kuldhara Village?

Kuldhara is located at a distance of about 18 kilometers from Jaisalmer. There were eighty-four villages in this area of ​​the Paliwal community and this was one of them. It is said that the Kuldhar branch of the industrious and noble Paliwal Brahmins settled this village in the year 1291. The Paliwal Brahmins were residents of Pali and migrated from there and settled in Jaisalmer. About 600 families lived in this village.

When is Kuldhara Village open?

Kuldhara Village is Open for Tourists:

What are some hotels near Kuldhara Village?

What are some places to visit near Kuldhara?

Places to Visit Near Kuldhara Village:

How to reach Kuldhara Village?

Kuldhara is located at a distance of about 18 kilometers from Jaisalmer. So once you reach Jaisalmer you can easily take a taxi or take your own car.

How to reach Kuldhara from Jaisalmer?

On reaching Jaisalmer, you can take a taxi to Kuldhara Village. Unfortunately, there is no other transport available between Kuldhara and Jaisalmer. Taxi is the only option available.

Created scientifically, this village was extremely prosperous. Kuldhara village was completely scientifically formed. The houses of the village were such, where even in summer, there was no feeling of heat. All the houses were built at such an angle that the winds passed directly through the houses and kept the atmosphere of the house cool. These houses of Kuldhara gave a feeling of air conditioning even in the desert.

The temperature in this place is 45 degrees in summer. But if you still go to these desolate houses in full heat, then you will experience coldness.

All the houses in the village were connected through vents so that any matter could be easily carried from one house to another. Water troughs, staircases, and cellars were also built in the houses. Money was hidden in the cellar.

Paliwal, despite being a Brahmin, was a very enterprising community. Paliwalas had grown GOLD (good crops) on the earth due to their intelligence, their skills, and unwavering hard work. Surprisingly, after coming to Kuldhara from Pali, the Paliwalas envisioned a society focused on farming, settling this village in the middle of the desert land.

Farming in the desert was the secret of prosperity of the Paliwalas. Recognizing and settling with the gypsum layer. Paliwal, because of his scientific thinking, experiments and modernity, was able to make so much progress even at that time.

This technique of water management of the Paliwalas made the Thar Desert the densest desert in the world in terms of population or number of humans and cattle. The Paliwalas had developed such a technique that the rainwater would not get lost in the sand but would accumulate at a particular depth.

The Paliwal community generally relied on farming and cattle rearing and won with great pride. The gypsum layer would prevent rainwater from being absorbed into the ground, and with this water, the Paliwal would cultivate and produce a very good crop.

But one day this village suddenly became empty and the residents of the village did not know where they disappeared. No one has been able to find out till date. Even today, Kuldhara Village is empty as soon as evening and no person dares to go there.

No one knows – Where these people left the village? Why they left the village or disappeared somewhere? Different mysterious stories are told about this. One of them is here.

What was the reason that that village was deserted overnight? The reason for this was profligate Diwan Salim Singh of the village, who had a dirty eye on a beautiful girl in the village. Salim Singh wanted him to marry the daughter of the chief but the villagers were against this marriage.

Diwan was so mad after the girl that he wanted to find her in some way. He started pressuring the Brahmins for this.

The extent of this happened when the Diwan, sent under the charge of power, sent a message to the girl’s house that if she did not get the girl till the next full moon night, she would attack the village and pick up the girl. It was a difficult time for the villagers. They either had to save the village or their daughter. All 84 villagers gathered at a temple to decide on this subject and the Panchayat (Village Council) decided that whatever happens, they would not give their girl to that Diwan.

What was it then, the villagers decided to vacate the village and overnight, all 84 villages were evacuated overnight. Though 82 villages were settled later, two thousand houses of Kuldhara remained desolate. While going, he cursed that after today no one will be able to settle in these houses. Even today the condition is the same as it was that night when people left it. Therefore at present, it is called a cursed village of Jaisalmer in Rajasthan.

So, We can say that – The destruction of this village was caused by Salim, the minister of the state of Jaisalmer.

Tourists come here in the desire that they can find gold buried here. According to historians, the Paliwal Brahmins kept their property, which contained a large amount of gold-silver and diamond-gems, under it. This is the reason that whoever comes here starts digging from place to place. With the hope that the gold might fall in their hands. This village is still found inscribed from place to place.

In May 2013, the team of the Paranormal Society, which conducted research on ghosts and spirits from Delhi, spent the night in Kuldhara village. The team believed that something unusual is definitely here. A member of the team said that during the journey many times during the night I felt that someone put a hand on my shoulder, when looking back, there was no one there.

Anshul Sharma, vice-president of the Peranormal Society had told that we have a device called Ghost Box. Through this we ask questions to the spirits living in such places. In Kuldhara also did the same, where some voices came and some unusual spirits also told their names.

The teams that went to Kuldhara at night found the children’s hand marks on their cars. When the team members returned after walking in Kuldhara village, the claws of the children appeared on the glass of their vehicles.